This was originally a talk given at MIRIAD on 28th January 2015, with the Adam Field YouTube video in the background and demonstrating making a pot while talking. THis post was first posted on my research blog.

Reviewing all my research so far from observations, interviews and my own practise the main important themes that keep coming through the research are

Seeing and watching seem to be important and very different elements in learning about ceramics. Seeing relates to something physical and static like an object, whether the finished or not. For learners it is important to see what comes before. For makers it is just as important to share what they have made. In the apprenticeship system they need to be able to see an example of the finished standard ware range to actually copy it.

Watching is more about observing things in actions, the processes, and the rhythm, how the maker holds their hands, those subtle little details that change making and bring a new flow to creating. These things can be so hard to grasp by yourself without seeing another person do them first. During interviews makers admitted to watching small sections of videos again and again.

Adam Field does a good job in his videos of showing off these first two points of watching and seeing, as there is making in action but in the background there are the immovable objects to see examples of the shapes and forms

Talking is an important point that could easily be forgotten due to making being a solitary activity where people are so focused on what they are doing. But talking allows us to share the how and why of what we are doing but also our influences, and also those little critiques that can enlighten a problem and a solution.

These first three points of seeing, watching and talking are supportable through online videos. Though the conversation is only one way as as viewers we can’t easily question these teachers in real time. The next two are far more personal and can only be done through repeating and thinking.

Touching, Holding, feeling can still only be done with the object right here in front of us. Though through touch we can almost reach out to the makers’ hand, and feel the thickness and how the piece was formed. There is also the balance and the weight of the piece that can change through using different materials from stoneware to earthenware and porcelain, that can only really be understood by handling the objects.

All these things feed into the most important part of learning and that is the making. Of the people I have interviewed making defines their lives, it is only through hours of making and remaking that they really learnt those skills and in some way they all like sharing their processes, whether it be face to face, blogs, or by videos. Of those that share videos, blogs or photographs it is about being open, educating the next generation of makers and their own customers as to the work and effort involved.

A part of my research has been about developing a process to teach people combining a few different techniques to make an object. I knew it couldn’t be the wheel due to logistics. So I went back to hand building techniques. I fell in love with the idea of onggi making a few years ago after meeting Adam Field. So for the first few months I was exclusively making with coils, which I have never been totally happy with this as a pure process.

After my regular making session a few weeks ago I decided to make something for my house, so I started searching through my bisque ware for an idea, it is mainly abandoned projects and I found five small plates in a pile, pulled them out. I just started rolling slabs and dropping them into the form then trimming them. They were still too flat so I trimmed around the plated and rolled some coils and added them to the pot, it quickly had a bit more presence. As the clay is earthenware it felt natural to throw some slip at the pieces, to add more energy to the work.

The project is still being developed and is open to change, but that is my favourite part of making and teaching others how to make, the experimentation and the change it brings to itself, the clay and the people interacting with it.

A video posted by Joseph Travis (@redfoxpottery) on Aug 16, 2015 at 4:51am PDT Recently I keep trying to write about the work of Ayumi Horie, James Gurney, Austin Kleon and so on. But every piece I write becomes torrid and dry, or it becomes a gushing piece “they are amazing”, “aren’t they creative” or “aren’t they really driving their work on”. I once wrote a piece about how annoyed I was about a particular ceramics writer always started a piece of writing about where he had come across the makers work; it became 100% about him rather than about…

This is an extract from a talk first given at the Material Matters Seminar at Manchester Metropolitan University on 10th December 2014.  It was presented with the following Svend Bayer YouTube video in the playing Background. It was originally published on my research blog.   In my early twenties I started searching for my own identity, I was stuck 200miles away from home studying the most hands on of all the classical science degrees, chemistry. Though as hands on as chemistry was there is something very hands-off about concentrated Hydrochloric acid that had a permanent place on my workbench. My…

You may remember my post on Saggars and some of my results.  I really want to talk a bit more how these wobbly pots are made. 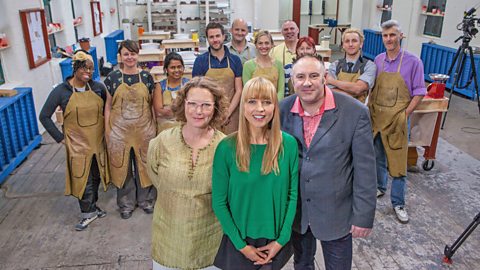 This week marks to start of the BBC’s Great British Pottery Throw Down, and from the pottery community there has been a mixed response as expected.  Personally I am feeling more upbeat about the program.

At my last supervisory meeting I was encouraged to create something a bit more visually interesting in my video than I had submitted at the meeting.  The videos I submitted for the meeting were the first videos I had ever tried to edit on Lightworks rather than windows movie maker. I was just trying to get to terms with it all and create a functional lesson in a technique. In my mind after finding applications like Meerkat and Periscope, was that I would just live stream a class with an application like Go To Meeting where the participants can meet…

So I was going through some pots in storage a few weeks ago and pulled out this lidded jar. It really caught my eye and I can’t stop looking at it, it is one of the last things I made before my youngest child was born. I have a feeling something similar to this will be on the cards again. They give a good variety of surfaces to carve, decorate and play with and I would like to get them into a saggar too, perhaps with a bit less decoration and let the saggar do all the work.